Gillian Sorensen and her daughter, Juliet Sorensen, have always considered the John F. Kennedy Library to be a part of their family’s legacy. Gillian’s late husband, Theodore C. Sorensen (Ted), was a key speechwriter, special counsel, and confidant to President Kennedy for 11 years. “Ted saw his vocation as an act of service to President Kennedy and the country,” Gillian shares. “His papers are archived at the Library and available for research.”

Ted’s will included a gift to the Library. After he passed away in 2010, the Library approached Gillian, who had a long career with the United Nations, and Juliet, who was a Peace Corps volunteer and is now a professor of law, with the idea of creating research fellowships and digitizing Ted’s papers. They loved this idea because it ensured that Ted’s contributions to the Kennedy administration would be available to all. The Theodore Sorensen Research Fellowship, administered by the JFK Library Foundation, supports researchers studying domestic policy, political journalism, polling, press relations, or related topics utilizing the JFK Library archives. 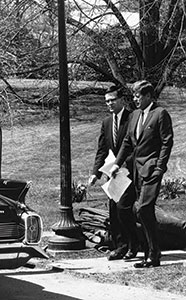 “My mother and I believe that President Kennedy’s legacy must be accessible—not just to scholars but to school groups, creatives, and others,” Juliet says. “Digitizing my father’s papers allows for greater access and keeps alive the importance of the Kennedy legacy.”

“Today, 80% of Americans were not alive during the Kennedy administration,” Gillian adds. “The Library and Museum provides educational programming and outreach initiatives like the #WordsCount campaign to make him relevant and inspirational today. Both donations and legacy gifts can help support President Kennedy’s ideals of effective government and leadership.”

“If you share the values of President Kennedy’s legacy—justice for all, peace, and the belief that each person can make a difference,” Juliet concludes, “your gift could be highly impactful to further your goals as well as those of the JFK Library.”