Brown Supports Library’s Mission with Annual Giving and a Bequest 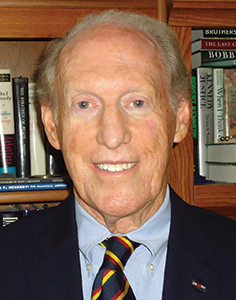 “There is something we can all do,” Tom Brown realized through following President Kennedy and supporting the JFK Library’s work over the years. “We are supporting American democracy and making some effort to ensure others learn.”

“President Kennedy was my commander in chief. He wanted to use his smarts in a very constructive, positive way to contribute to society. John Kennedy was the type of guy most men should aspire to be,” Tom Brown reflects on his time serving in the U. S. Army when President Kennedy called Americans to become pioneers of the New Frontier and later while studying at the University of Rhode Island during the Cuban Missile Crisis.

In Washington, Brown earned an MA in government and read The Washington Post daily to learn more about the “players and process of government.” He graduated from American University realizing “I need to do more.”

As a community college professor, government relations professional for the Sperry Corporation, and research services coordinator for the U.S. Senate, Brown followed President Kennedy’s scriptural call “for those to whom much has been given, much is required.”

A Library member since the 1980s, Brown has structured a comprehensive gift to double his commitment to date over the next five years through annual giving and a planned bequest. “It’s important to start early if you can, in whatever capacity can work.”

The JFK Library’s focus on reaching the 80% of Americans with no living memory of President Kennedy inspired Brown to join the Victura Society and help advance the Library’s work now and for the future.

“Pass it along. The time is approaching when no one will have a personal remembrance. The JFK Library is the place to remember and learn, and I realized there is something more that I can do. I hope my commitment will encourage others to join.”